To the musical ear, life has a rhythm comparable to grand opera or simple folk tunes. Our ability to understand that rhythm and synchronise with each other is at the core of every human interaction.

That's why researchers in San Diego believe that learning to play musical instruments can help us focus attention and improve our ability to interact with the world around us.

For more than a year, children at the city's Museum School have been taking part in an experiment involving Gamelan, a percussion style of ensemble music from Indonesia that emphasizes synchronicity.

Sensors attached to the instruments monitor the children's ability to hit the beat precisely. The data is analyzed and a mathematical algorithm is used to determine a base measurement of their accuracy. That measurement is then compared to the results of behavioural and cognitive tests, and assessments by teachers and parents.

"So far, we've found a correlation between their ability to synchronise and their performance on cognitive tests," says Alexander Khalil, head of the Gamelan Project, funded by the National Science Foundation.

"What this could mean, is that learning to time in a group setting with other people musically, could improve your ability to focus attention."

Khalil began the research after several years of noticing that children who lacked the ability to synchronize also struggled to pay attention during other activities. As their musical ability improved, so did their attention.

"It is possible that music practice could become a non-pharmacological intervention for problems such as ADHD (attention deficit-hyperactivity disorder). We haven't tested it yet but it's a possibility - and an exciting possibility," he says.

ADHD is a neurobehavioral disorder that affects one in 10 children in the US. They have problems paying attention, controlling impulsive behaviour and can be overly active. It can't be cured but the symptoms can be managed - often with medication.

It's thought music might help such children because our sense of timing affects so much of our behaviour.

Music offers many different layers and levels of time, from the milliseconds it takes to gauge a series of beats, to the minutes of a musical phrase or fragment and the hours of a full performance. 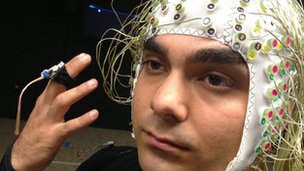 A study participant wears headgear that allows researchers to monitor his brain activity while moves to music.

"By learning music, one of the things you learn is rhythm and how to be aware of the temporal dynamic of the world around you and how to keep your attention focused on all of these things while you do what you do."

The Gamelan Project is part of a growing body of research into the effects of music on the brain. New imaging technology is making it possible to discover how different areas of brain function are connected.

"Having these ways to look into the brain gives us a tool that we can then use to study the effects of music on the growth and development of the brain," says Professor John Iversen of the Institute of Neural Computation at the University of California San Diego.

He's heading the Symphony Project, one of the first longitudinal studies of its kind on the effects of musical training on brain development.

"There's always this nature/nurture question - are musicians' brains different because of music, or are the people with that kind of brain the ones that stuck with music because they're good at it?" says Iversen.

"To really understand whether it's music making these brain changes, you have to study someone as they begin to learn music and as they continue learning music. Then you can see how their brain develops and compare that with children not doing music."

It could be five years before any results of the study are known but scientists are already speculating that it could have far-reaching implications for musical training.

"What if we have some kids that are intensively studying music and we find that their brains grow at an accelerated rate?" says Iversen.

"The more you work out, the bigger your muscles get. The brain may work somewhat like that as well. The more you practice the stronger the circuits will become."

Paula Tallal is co-director of the Center for Molecular and Behavioural Neuroscience at Rutgers University. She spent her career studying how children use time to process speech. She says people who have had musical training have been shown to have superior processing skills.

"What we don't know is whether there is something common to musical training that is common to attention, sequencing (processing the order in which something occurred), memory and language skills," she says.

"We know from multiple studies that children who have musical training do better at school. We don't need further research to show that. What we're interested in from a scientific perceptive is why that occurs. What neural mechanisms are being driven by musical experience and how do they interact with other abilities."

She says this research is ever more critical because many schools facing budget shortfalls are cutting music programmes.

"We're creating an impoverishment that nobody understands the long term effects of," she warns.