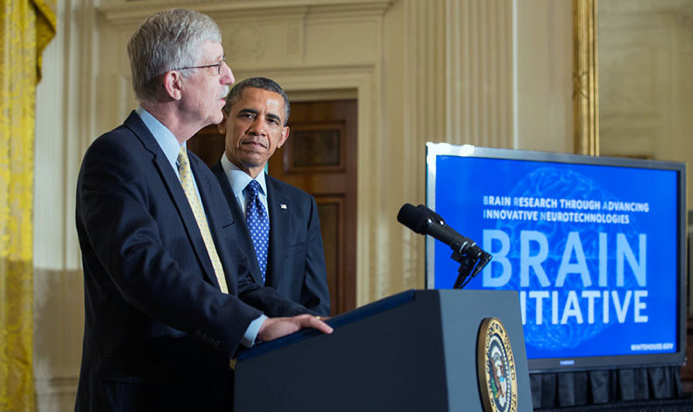 President Barack Obama is introduced by Dr. Francis Collins, Director, National Institutes of Health, at the BRAIN Initiative event in the East Room of the White House, April 2, 2013. (Official White House Photo by Chuck Kennedy) The President of the United States gathered together on April 2 "some of the smartest people in the country, some of the most imaginative and effective researchers in the country," he said, to hear him announce a broad and collaborative research initiative designed to revolutionize our understanding of the brain.

The BRAIN Initiative, short for Brain Research through Advancing Innovative Neurotechnologies, is launching with approximately $100 million in proposed funding in the president's Fiscal Year 2014 budget. It aims to advance the science and technologies needed to map and decipher brain activity.

Sitting in the front row for the announcement were three University of California chancellors, including UC San Diego's Pradeep K. Khosla. 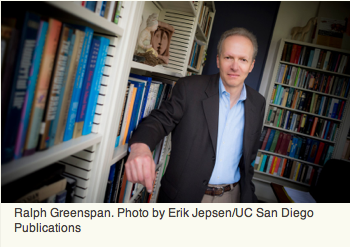 "As humans, we can identify galaxies light years away, we can study particles smaller than an atom," President Barack Obama said. "But we still haven't unlocked the mystery of the three pounds of matter that sits between our ears."

The human brain, Obama pointed out, has some 100 billion neurons and trillions of connections between them. Right now, he said, borrowing a musical metaphor from National Institutes of Health Director Francis Collins, we can make out just the string section of the orchestra. The BRAIN Initiative aims to make it possible to hear the entire symphony.

Speaking from D.C., Chancellor Khosla said he was struck by the levels of energy and enthusiasm during the president's speech and in the community afterwards.

"The president's initiative is charting the next frontier of science," Khosla said, "and UC San Diego is poised and ready to help our country lead the way. Neuroscience, biology, and cognitive science are among the premier areas of strength on our campus, and we are really excited to be part of the effort to gain a deep understanding of human beings and how we behave.

"We anticipate our scientists will continue to play key roles in this great endeavor," Khosla said, "Researchers from UC San Diego—in collaboration with colleagues at Salk and others on the Torrey Pines Mesa—will be involved in almost all areas of the BRAIN initiative, from those in the sciences and engineering who will help to draw the brain-activity map to those in social sciences who will help to read the map, figuring out how brain activity translates into cognition."

In addition to research funding support from three federal agencies—the National Institutes of Health, the Defense Advanced Research Projects Agency, and the National Science Foundation—the BRAIN Initiative is also supported by financial commitments from the private sector. These include longtime UC San Diego partners the Salk Institute and the Kavli Foundation.

The Kavli Foundation and the Kavli Institute for Brain and Mind, said KIBM's Greenspan, played important roles in sparking the BRAIN Initiative.

The audacious idea of a comprehensive brain activity map was first discussed at a seminal meeting in September 2011 of 13 neuroscientists and 14 nanoscientists at the Kavli Royal Society International Centre outside of London. Greenspan was one of the leaders to flesh out the idea and draft a white paper. He also credits in particular Miyoung Chun, the Kavli Foundation's vice president of science programs. She was key, he said, first in connecting up with the White House Office of Science and Technology Policy and then keeping "us all on track in developing and expanding the idea over the next year and a half."

He is—along with Chun and colleagues from Berkeley, Caltech, Harvard and Columbia–one of the original six architects of the catalytic proposal published in Neuron in June 2012.

Also speaking from D.C., right after attending the White House announcement, Greenspan– who recalls "falling off his chair" when he heard the president reference brain mapping in his 2013 State of the Union Address and then recalls falling off again when the New York Times' John Markoff broke the story in February, far ahead of the official announcement– said: "I still think it's unbelievable it's come to pass. It's a miracle of the right idea of falling on fertile ground at the right time.

"We're at a crossroads in the history of neuroscience and the history of nanoscience," Greenspan said. "We're at a stage now where a marriage of the two can create the synergy we've dreamed about but so far hasn't been possible."

Jeff Elman, dean of the Division of Social Sciences at UC San Diego, echoed Greenspan's sentiments. Elman is a co-founder of UC San Diego's department of cognitive science, the first of its kind in the world, and co-director emeritus of the KIBM, launched at UC San Diego in 2004 to support interdisciplinary research ranging from "the brain's physical and biochemical machinery to the experiences and behaviors called the mind."

"Ten years ago, comprehensively mapping human brain activity would have been fanciful. The technology required would have seemed like science fiction," Elman said. "Today, the technology and the goal appear to be within our grasp."

Khosla, Greenspan and Elman all agreed with President Obama's comment during his speech at the White House that this is just a beginning—a very exciting beginning to an effort that will yield many positive consequences.

In his speech, Obama stressed the importance of ideas and innovation to the U.S. economy and reminded the nation that it is critical to invest in basic research. Understanding the brain's complex circuits of neurons, and the behaviors to which these give rise, he said, will eventually lead to treatments for brain disorders, such as Alzheimer's or autism, but it will also result in applications we can't even imagine yet.

He compared BRAIN to the Human Genome Project, which enabled scientists to map the entire human genome and helped create not only jobs but also a whole new era of genomic medicine. And he characterized it as one of his administration's "Grand Challenges for the 21st Century," ambitious but achievable goals like "making solar energy as cheap as coal or making electric vehicles as affordable as the ones that run on gas."

Obama said, "We have a chance to improve the lives of not just millions, but billions of people on this planet through the research that's done in this BRAIN initiative alone. But it's going to require a serious effort, a sustained effort. And it's going to require us as a country to embody and embrace that spirit of discovery that made America – America."

"Let's get to work," he said in closing.