The brain is the most complex device in the known universe. With 100 billion neurons connected by a quadrillion synapses, it's like the world's most powerful supercomputer on steroids. To top it all off, it runs on only 20 watts of power… about as much as the light in your refrigerator.

These were a few of the introductory ideas discussed by Terrence Sejnowski, Director of the Computational Neurobiology Laboratory at the Salk Institute for Biological Studies, a co-director of the Institute for Neural Computation at UC San Diego, an investigator with the Howard Hughes Medical Institute and a member of the advisory committee to the director of National Institutes of Health (NIH) for the BRAIN (Brain Research through Application of Innovative Neurotechnologies) Initiative, which was launched in April 2013. 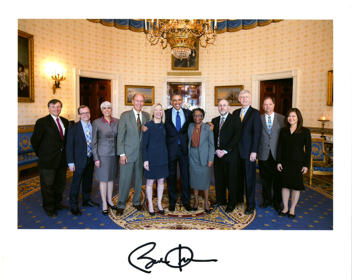 "I was in the White House when the program was announced," Sejnowski recalled. "It was very exciting. The President was telling me that my life's work was going to be a national priority over the next 15 years."

At that event, the NIH, the National Science Foundation, and the Defense Advanced Research Projects Agency announced their commitment to dedicate about $110 million for the first year to develop innovative tools and techniques that will advance brain studies, which will ramp up as the Initiative gains ground.

In a recent talk in San Diego at the XSEDE13 conference — the annual meeting of researchers, staff and industry who use and support the U.S. cyberinfrastructure — Sejnowski described the rapid progress that neuroscience has made over the last decade and the challenges ahead. High-performance computing, visualization and data management and analysis will play critical roles in the next phase of the neuroscientific revolution, he said.

A deeper understanding of the brain would advance our grasp of the processes that underlie mental function. Ultimately it may also help doctors comprehend and diagnose mental illness and degenerative diseases of the brain and possibly even intervene to prevent these diseases in the future.

Currently, this dream is a long way off. Brain activity occurs at all scales from the atomic to the macroscopic level, and each behavior contributes to the working of the brain. Sejnowski explained the challenge of understanding even a single aspect of the brain by showing a series of visualizations that illustrated just how interwoven and complex the various components of the brain are.

One video [pictured below] examined how the axons, dendrites and other components fit together in a small piece of the brain, called the neuropil. He likened the structure to "spaghetti architecture." A second video showed what looked like fireworks flashing across many regions of the brain and represented the complex choreography by which electrical signals travel in the brain.

Despite the rapid rate of innovation, the field is still years away from obtaining a full picture of a mouse's or even a worm's brain. It would require an accelerated rate of growth to reach the targets that neuroscientists have set for themselves. For that reason, the BRAIN Initiative is focusing on new technologies and tools that could have a transformative impact on the field.

"If we could record data from every neuron in a circuit responsible for a behavior, we could understand the algorithms that the brain uses," Sejnowski said. "That could help us right now."

Larger, more comprehensive and capable supercomputers, as well as compatible tools and technologies, are needed to deal with the increasing complexity of the numerical models and the unwieldy datasets gleaned by fMRI or other imaging modalities. Other tools and techniques that Sejnowski believes will be required include industrial-scale electron microscopy; improvements in optogenetics; image segmentation via machine learning; developments in computational geometry; and crowd sourcing to overcome the "Big Data" bottleneck.

"Terry's talk was very inspiring for the XSEDE13 attendees and the entire XSEDE community," said Amit Majumdar, technical program chair of XSEDE13. Majumdar directs the scientific computing application group at the San Diego Supercomputer Center (SDSC) and is affiliated with the Department of Radiation Medicine and Applied Sciences at UC San Diego. "With XSEDE being the leader in research cyberinfrastructure, it was great to hear that tools and technologies to access supercomputers and data resources are a big part of the BRAIN Initiative."

For his part, over the past decade Sejnowski led a team of researchers to create two software environments for brain simulations, called MCell (or Monte Carlo Cell) and Cellblender. MCell combines spatially realistic 3D models of the geometry of the brain (as determined by brain scans and computational analysis), and simulates the movements and reactions of molecules within and between brain cells—for instance, by populating the brain's 3D geometry with active ion channels, which are responsible for the chemical behavior of the brain. Cellblender visualizes the output of MCell to help computational biologists better understand their results.

Researchers at the Pittsburgh Supercomputing Center, the University of Pittsburgh, and the Salk Institute developed these software packages collaboratively with support from the National Institutes of Health, the Howard Hughes Medical Institute, and the National Science Foundation. The open-source software runs on several of the XSEDE-allocated supercomputers and has generated hundreds of publications.

MCell and Cellblender are a step in the right direction, but they will be stretched to their limits when dealing with massive datasets from new and emerging imaging tools. "We need better algorithms and more computer systems to explore the data and to model it," Sejnowski said. "This is where the insights will come from — not from the sheer bulk of data, but from what the data is telling us."

Supercomputers alone will not be enough either, he said. An ambitious, long-term project of this magnitude requires a small army of students and young professional to progress.

Sejnowski likened the announcement of the BRAIN Initiative to the famous speech where John F. Kennedy vowed to send an American to the moon. When Neil Armstrong landed on the moon eight years later, the average age of the NASA engineers that sent him there was 26-years-old. Encouraged by JFK's passion for space travel and galvanized by competition from the Soviet Union, talented young scientists joined NASA in droves. Sejnowski hopes the same will be true for the neuroscience and computational science fields.

"This is an idea whose time has come," he said. "The tools and techniques are maturing at just the right time and all we need is to be given enough resources so we can scale up our research."

The annual XSEDE conference, organized by the National Science Foundation's Extreme Science and Engineering Discovery Environment (xsede.org) with the support of corporate and non-profit sponsors, brings together the extended community of individuals interested in advancing research cyberinfrastructure and integrated digital services for the benefit of science and society. XSEDE13 was held July 22-25 in San Diego; XSEDE14 will be held July 13-18 in Atlanta. For more information, visit https://conferences.xsede.org/xsede14