This 60-minute event explores how music can provide insights into brain functioning, reduce social isolation, promote community solidarity, and influence health. Dr. Iversen takes part in a conversation about the power of music in community with musician Quetzal Flores. More

Closer to Truth: How Do Brains Make Music? (Part 1)

Closer to Truth is a PBS interview series on music and the brain. Watch Part 1 interviews with INC's John Iversen, along with Mark Tramo, Diana Deutsch, and Elizabeth Margulis. More

Salk scientists discover patterns of neural waves in the awake brain that help detect objects. The labs of Drs. John Reynolds and Terry Sejnowski have uncovered details into the neural mechanisms underlying the perception of objects. (Salk News) More

Terry Sejnowski featured in New York Times article: The Machines Are Learning, and So Are the Students (12/18/19) More

The NIH has for the first time committed 20 million over five years to study the various ways in which music impacts health and development. Among the awards was a collaboration led by John Iversen (INC), with UCSD's Terry Jernigan (Cog Sci) and Tim Brown (Neuroscience). More

The Neuroelectromagnetic Data Archive and Tools Resource (NEMAR) will be a collaboration between the Swartz Center for Computational Neuroscience(SCCN) at the Institute for Neural Computation, San Diego Supercomputer Center (SDSC), and Stanford University’s Center for Reproducible Neuroscience.  More

4/30/20 – John Iversen speaks about the Neuroscience of Rhythm

Researchers used reinforcement learning to train gliders to autonomously navigate atmospheric thermals. The study, a collaboration between UC San Diego, the Salk Institute and Abdus Salam International Center for Theoretical Physics in Italy, was published in the Sept. 19 issue of “Nature." Dr. Terry Sejnowski, a co-author of the study, explains, "This paper is an important step toward artificial intelligence." (UC San Diego) More

TDLC investigator Dr. John Iversen spoke at Music and the Mind, held at The Kennedy Center on September 7-8, 2018. The program brought together artists and neuroscientists to explore connections between music, rhythm, and brain development. Click here for more! You can also read about the event on The Kennedy Center website, or download the flyer here!

Dr. Leanne Chukoskie founded a program that has hired dozens of paid interns diagnosed with autism. The interns develop computer apps that can help others with autism, as well as anyone trying to improve motor skills and focus. More

Ruey-Song Huang of UC San Diego and Martin Sereno of San Diego State University have produced a new kind of atlas of the human brain that, they hope, can be eventually refined and improved to provide more detailed information about the organization and function of the human brain. (UC San Diego News Center) More

The article title: 15 Coolest Jobs in San Diego and How to Get Them (San Diego Magazine) More

12/12/17 – What Learning Looks Like: Creating A Well-Tuned Orchestra In Your Head

Dr. John Iversen discusses the neuroscience of music and its effect on brain development in school age children! (KPBS) More

Institute for Neural Computation (INC) Co-Directors Drs. Terry Sejnowski and Gert Cauwenberghs are part of the international collaboration led by Brown University to develop a wireless neural prosthetic system that could record and stimulate neural activity with unprecedented detail and precision. (Jacobs School of Engineering) More

Their MOOC for Coursera called "Learning How to Learn," has already enrolled 1.8 million learners. Their follow-up new course is called "Mindshift: Break Through Obstacles to Learning and Discover Your Hidden Potential." They have also written a "Learning How to Learn" book for children ages 10-13. More

INC's Leanne Chukoskie is part of an interdisciplinary team of researchers at UCSD and Rady Children’s Hospital that has developed a sensor-equipped glove that could help doctors measure stiffness during physical exams. More

The Scientist article features TDLC's Dr. John Iversen. It profiles his work on the neural mechanisms of rhythm perception, where he has demonstrated the active role of the brain in shaping how a listener perceives a rhythm. More
More for his interview on Voice of La Jolla!

Several INC scientists have been awarded an NSF grant to study how physical movement can be used to identify children with learning disabilities. (IUB Newsroom).

Drs. John Iversen and Alex Khalil, along with Joseph Heng (visiting Masters student from Switzerland) made up "Team Goblin. More

Qusp (now known as Intheon) was founded by former INC member Tim Mullen and is listed on the 2017 TransTech200. More

The Listening to Waves program was developed from the research Victor Minces and Alexander Khalil did at the Temporal Dynamics of Learning Center (TDLC). The goal of this program is for participants to" learn the hidden and ubiquitous world of waves through the making and analysis of musical sound." More

The study, published in the journal eLife, also sheds light on how the brain can manage massive amounts of data with very little energy, and avoids conceptual traps that can stymie machine learning algorithms, said Bartol, the study's first author. Noted brain researcher Terry Sejnowski was senior author. The study can be found at j.mp/synapti.

Emotient is a start up founded by six scientists from UC San Diego -- INC/MPLab in 2012. (Macworld) More

The research is a collaboration among the labs of Salk professors Sejnowski, Inder Verma and Stephen Heinemann (Science 2.0)More

Researchers at the University of California, San Diego, are working on a breakthrough that could change how doctors treat patients and their pain. (ABC News) More

Scientists at the Salk Institute in La Jolla have created a new model of memory that explains how neurons retain select memories a few hours after an event. This new framework provides a more complete picture of how memory works, which can inform research into disorders liked Parkinson’s, Alzheimer’s, post-traumatic stress and learning disabilities. (Times of San Diego) More

The start-up Emotient is a prime example of how industry, academia, and venture capital can combine to create a groundbreaking business. (UC San Diego News Room) More

The future of shopping: When psychology and emotion meet analytics (zdnet) More

Welcome to The Society for Music Perception and Cognition (SMPC), a scholarly organization dedicated to the study of music cognition. Use our website to learn about this rapidly growing field, including information on researchers, conferences, and student opportunities. Join us as we explore one of the most fascinating aspects of being human. About SMPC

09/17/2013 – INC Co-Director selected by the NSF to take part in a five-year, multi-institutional, $10 million research project

SIMPHONY, short for Studying the Impact Music Practice Has On Neurodevelopment in Youth, is a collaboration among researchers at UC San Diego's Center for Human Development and the Institute for Neural Computation. More

The success story is highlighted in CaN CTA report.

The world is getting a long-awaited first glimpse at a new humanoid robot in action mimicking the expressions of a one-year-old child. The robot (Diego-san) will be used in studies on sensory-motor and social development – how babies "learn" to control their bodies and to interact with other people. (UC San Diego News Center) More 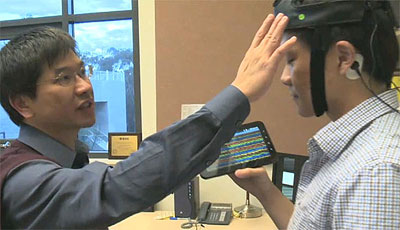 UC San Diego scientists are developing technology that links thoughts and commands from the brain to computers. In addition to neat gadgets like mind-dialed cell phones, devices to assist the severely disabled and a cap to alert nodding-off air traffic controllers, new technology could reshape medicine. Last spring, Tzyy-Ping Jung was all over the news. MIT Tech Review, the Huffington Post and a dozen other outlets and blogs were buzzing about his new headband, capable of reading your thoughts and transferring them to a cell phone. More

ABC News, KPBS, and UCSD-TV have all recently featured new brain-computer interface (BCI) technology developed by Dr. Tzyy-Ping Jung and associates Yu-Te Wang and Yijun Wang of the Institute for Neural Computation. This technology represents a unique and fast-advancing generation of mobile, wireless brain activity monitoring systems. An immediately promising application, whose feasibility was first demonstrated by UCSD researchers Jung and Makeig in the 1990's, is to monitor the alertness of workers in a variety of occupations that require around the clock alertness, such as air traffic controllers, drivers and pilots, and nuclear power plant monitors.

A new class of brain-computer interface technology could not only let you control devices and play games with your thoughts, but also help detect fatigue in air traffic controllers and other workers in high-stakes positions. Researchers at the Swartz Center for Computational Neuroscience at the University of California, San Diego, have made it possible to place a cellphone call by just thinking about the number. They say the technology could also tell whether a person is actively thinking, or nodding off. More

The UCSD TV series on UCSD's 50th Anniversary year put together an episode on brain-computer interface research at SCCN and INC. View the video here...

The February issue of Neuro Image: A Journal of Brain Function will feature an article by INC researcher Arnaud Delorme and his student Claire Braboszcz. Citation: http://www.ncbi.nlm.nih.gov/pubmed/20946963

Gert Cauwenberghs, Co-Director of INC, takes on multiple leadership roles for IEEE in 2011. Gert is the newly named Editor-in-Chief of IEEE Transactions on Biomedical Circuits and Systems. In addition to his role in primary publications in the field, he will Chair two upcoming conferences, General Chair of the IEEE Biomedical Circuits and Systems Conference in San Diego in 2011, and Technical Chair of the IEEE Engineering in Medicine and Biology Conference in 2012.

INC researcher Javier Movellan has been awarded a grant of $749,998 by the National Science Foundation to support development of RubiNet, a social network for early childhood education. The project will develop resources for early childhood education at national and international levels , bringing children, teachers, parents, and researchers together. A unique feature of the project is the use of low-cost, sociable robots as network interfaces. In addition to supporting education and data gathering, the robots will allow children to exchange objects across international boundaries using the robots as intermediaries. This significant difference from other computer interfaces will also allow children in the United States to look around a classroom in Japan, find their friends, and initiate a hug using the robot's child-safe arms.

In collaboration with the Institute for Engineering Medicine, INC will host students and post docs to to work wth INC and IEM researcher. Txxy-Ping Jung, of the Center for Advanced Neural Engineering (CANE) participated in the development of the proposal recently approved by Taiwan's National Science council. The students and researchers visiting from Taiwan will be participation in an International Center in Advanced Bioengineering Research.

The Institute for Neural Computation (INC) and Institute of Engineering in Medicine (IEM) have jointly launched the UC San Diego Center for Advanced Neurological Engineering (CANE), under Co-Directors William Mobley, Professor and Chair of Neuroscience and Tzyy-Ping Jung, INC Senior Research Scientist and Co-Director of the Swartz Center for Computational Neuroscience (SCCN). The mission: To successfully apply the area’s abundant neural engineering and computation expertise toward translation of basic knowledge and capabilities into solid improvements in the diagnosis, treatment, and prevention of neurological diseases and pathology More

The Discovery Channel filmed Howard Poizner and Gary Lynch in Dr. Poizner’s lab for a series called ‘Curiosity: The Questions of Life,’ on research of the future. The segment is on memory and will air in 2011. Shown on the left is series producer Kyle McCabe, and on the right, series host Dr. Dan Riskin, who is wearing Dr. Poizner’s motion capture body suit, EEG cap and virtual reality head-mounted display.

La Jolla, CA - Salk Institute professor Terrence J. Sejnowski, Ph.D., whose work on neural networks helped spark the neural networks revolution in computing in the 1980s, has been elected a member of the National Academy of Sciences. More